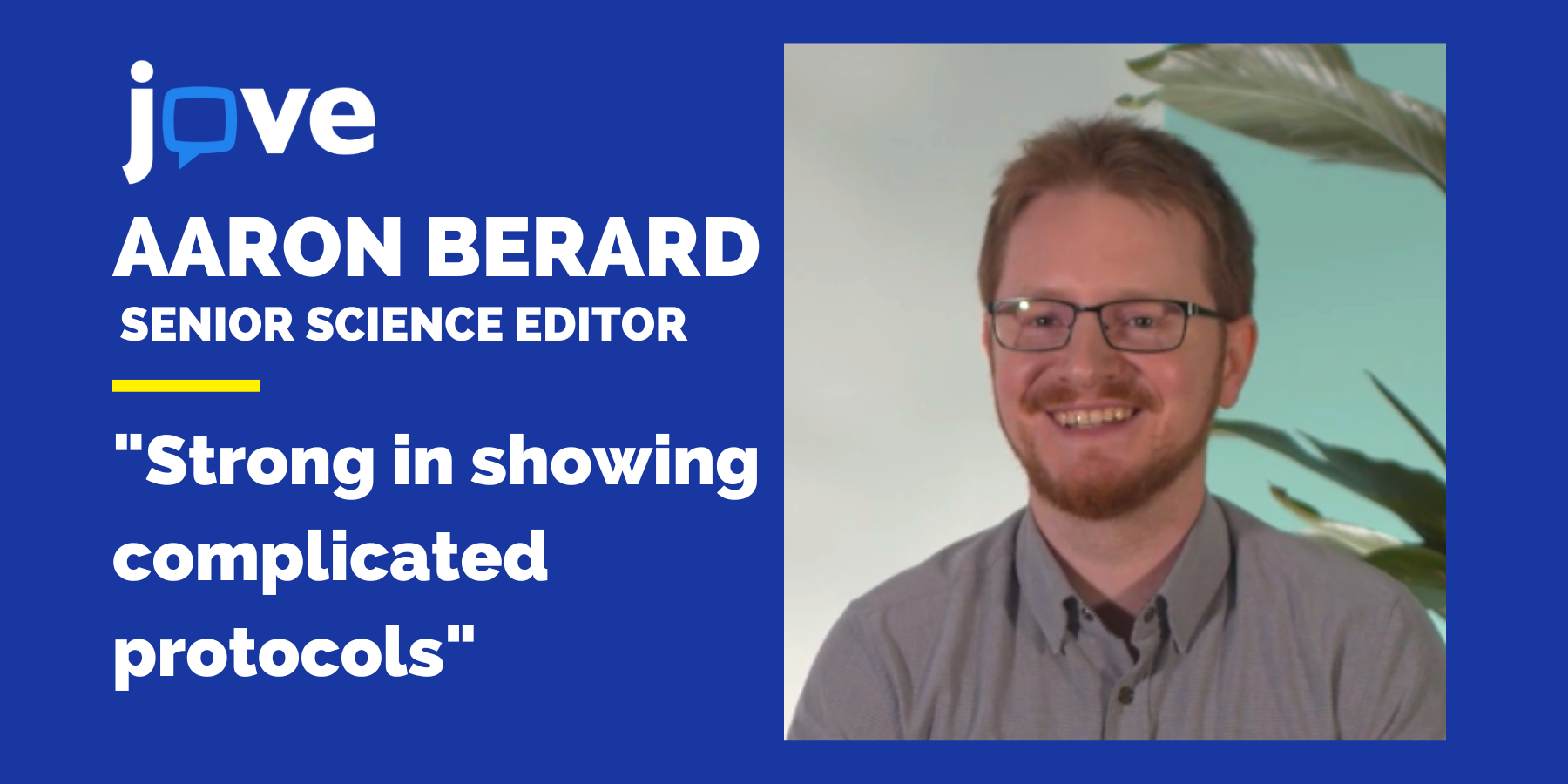 For This JoVEr, Seeing is Repeating (the Experiment)

JoVE Snapshot: This is a regular series profiling the JoVErs doing outstanding work in editorial, customer success, videography, and more. Together, they are changing how science is done.

What do you do at JoVE?

Our main job here as science editors is acquisitions, so we talk to various researchers at different universities and companies to find interesting methodologies to publish. We help them work out a good plan for a submission and how to write up a protocol that will eventually translate into a video article. Every day, we’re following the frontier of different cutting-edge techniques and maintaining a network of top scientists.

What in your education and research background prepared you to do your job?


I’ve always had an affinity for the bigger picture of things, and that’s one of the reasons I wanted to work here. I've always liked keeping up with developing research trends, in terms of the broader perspective. I received my Ph.D. at Brown, where I studied cognitive science and specialized in brain plasticity. This, specifically, is how the brain adapts and learns, and how memories are formed in response to the environment. I focused on sleep and the processes that occur during sleep that guide this plasticity. I mainly used non-invasive brain imaging techniques involving electroencephalograms (EEG) and functional magnetic resonance imaging (fMRI) to get a better representative image of the activity in the brain.

For my postdoc, I worked with similar brain mechanisms and focused on clinical applications related to Alzheimer’s disease. This included having older people do MRI experiments, which is actually really tricky. There's a lot of additional protocol involved with clinical populations to ensure everything is comfortable and safe for the participants. I was also involved with grant writing on the topic and the background science was really interesting. There’s a lot of money in Alzheimer’s research, so there were a lot of publications coming out that year.

At JoVE, I started as the editor for the behavior section, and eventually was put in charge of the neuroscience section, as well. I'd say my diverse background in the behavioral sciences, as well as my clinical experience, allowed me to better convey the JoVE method to other researchers. I had a broad understanding of the popular methodologies and how they would be best explained in video.

JoVE helped you when you were a researcher?

I used the videos in graduate school — that’s how I learned about JoVE.  There’s a certain technique for experimental EEG, specifically for applying electrodes to someone’s head. There's a trick to obtaining the best conductance that involves making a circular wrist motion when applying each electrode. If you don't do this enough, there will be a poor connection between the machine and the computer recording the data. There's 64 electrodes, too, which can be time-consuming [to apply] if you're moving slowly.

Before JoVE, I was just reading manuals on how to apply electrodes, which was difficult for the subtler parts of the procedure. You really need to see someone do it first. It’s a quality process, and for this reason, it really shines when explained over video. At first, I had a lot of trouble learning to do the application correctly, but after I watched the JoVE video I felt much more comfortable.

When I talk to researchers over the phone, I share my personal experiences with JoVE. I’d say most graduate students I talk to are very familiar with us and have had similar experiences that mirror my first encounter with JoVE. It seems very popular with younger upcoming researchers, or just-graduated postdocs. Usually the principal investigators I talk to are less familiar with us. But others who are directly involved in the research actively use JoVE all the time.

We’re really strong in showing complicated protocols, especially when broken down into small, easily digestible steps. One of our top priorities is to make sure the protocols we receive can be represented properly and thoroughly on camera. This includes helping the authors write in a way that is clear and direct, even with less-visual methods, such as computational research. We’ve made recent efficiency changes that allow us to film computational work, which has become very common in the neuroscience field.

Computational research is actually becoming a trend in almost every section of JoVE, not just in neuroscience. We are beginning to see a lot of this — from machine learning to adaptive algorithms to data processing — where all sorts of computer-based work is becoming popular. So, it’s really great we broadened our scope to include this new wave of science. We should keep an open mind moving forward, and do our best to adapt to filming a broader spectrum of scientific methods.

What are you seeing out there for science trends, both in general and at JoVE, too?

Talking to many scientists, especially neuroscientists and behavior researchers, there are two trends I see now: virtual reality and 3-D printing. These scientists are using virtual reality to simulate behavioral paradigms, which is pretty cool. They’re also using 3-D printing for simplifying protocols and creating budget experiments that are more accessible to other researchers. Things like this will be huge going down the line and we’ll be seeing those methods more and more.

I like all things “Star Trek.” From the original series all the way to "Discovery." I love science, so it comes with the territory!