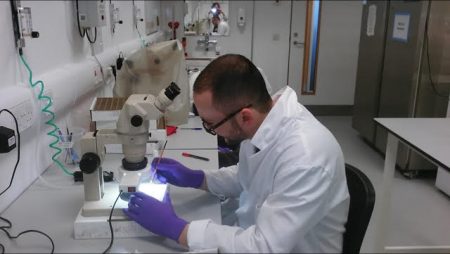 By using JoVE video training articles, the Vale Lab slashed the time needed to learn complex lab protocols by up to 50 percent. This accelerated time to productivity and streamlined training for existing techniques and when learning new ones. To advance its research area, the Vale Lab has also shared its protocols with the scientific community by publishing in JoVE Video Journal.

The Vale Lab at the Institute of Evolutionary Biology at the University of Edinburgh specializes in researching the evolutionary ecology of infection and immunity, primarily using the fruit fly (Drosophila melanogaster) as a model system. The lab focuses on understanding the causes and consequences of variation in host health during systemic and chronic infections.

The Vale Lab frequently has as many as six researchers at a time, in addition to two-to-three rotation students entering at various times of the year. In 2013, the group began to work with Drosophila — requiring the mastery of new techniques, says Pedro Vale, the lab’s primary investigator.

To learn novel techniques, the researchers often relied on methods in published papers, says Vale. “But very often, when we tried to repeat different methods, we ran into slightly different problems. It was often very difficult to troubleshoot those problems because those methods sections weren’t written to the necessary level of detail. It would take a few times to get the protocol right.”

Eventually, Vale discovered JoVE Video Journal, which offered high-quality, peer-reviewed video articles. Vale found JoVE had detailed text instructions with the accompanying videos, always showing a practitioner performing every step of a method. He says: “I think that’s critical for some of the more complicated protocols. With JoVE, you could actually observe someone doing things, and you would avoid mistakes.”

Impressed by the quality and efficacy of the Video Journal, Vale has also published some of his lab’s own protocols with JoVE.

Adoption of JoVE video has enabled multiple benefits for the Vale Lab. Video has improved internal training, and enabled the dissemination of in-house techniques to the scientific community. The specific areas of benefit comprise: